Painted in 1881, Luncheon of the Boating Party is an Impressionist painting by French painter Pierre-August Renoir. Full of light, airy colors, the scene is that of Parisian leisure in which friends enjoy a relaxed afternoon on a veranda together.

Of course, we’ll dive into what makes it a masterpiece, but just by looking at it the work you can see the skillful hand of Renoir and the chemistry of the friend group. Stylistically, the composition is particularly diverse—the eye roams around the delicate objects on the table, the lush nature that surrounds them, and even small boats floating in the background.

The subject matter—friends relaxing in the height of summer—is timeless, and has remained one of the most famous 20th-century paintings. Luncheon of the Boating Party currently resides in the Phillips Collection in Washington, D.C.

About the Artist: Pierre-Auguste Renoir

Renoir’s name is well-known in art history. Born in France, Renoir spent most of his adult life in Paris, where he enjoyed considerable fame during his lifetime. In fact, he grew up close to the world-famous Louvre, which he frequented often, and fell in love with the works of the Old Masters.

His first artistic job was in a porcelain factory. He was gifted at work, but he often grew bored of it and would find inspiration in the beautiful paintings in the Louvre. However, his talent was recognized by others, and he would go on to study art and become a fine artist.

Renoir is well-known for his role in founding Impressionism, which was a movement away from realism and aimed to capture the fleeting qualities of nature. We’ll get this this later, but Luncheon of the Boating Party was painted during a pivotal time in his art career, when he was starting to move away from his original Impressionist style and developing his own. 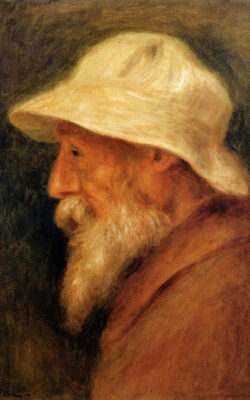 Luncheon of the Boating Party Story

Interestingly, the models in the painting—all friends of the artist—have been identified.

Briefly, let’s dive into the Luncheon of the Boating Party story. A woman who frequently modeled for Renoir named Angèle looks up at a journalist standing on the right named Maggiolo. Gustave Caillebotte, a fellow Impressionist painter, sits and looks across the table at Aline Charigot, who would become Renoir’s wife. He famously scratched out another sitter to have space to include her face. She sits and looks lovingly at her puppy.

There are several more art-world figures in the composition: Charles Ephrussi, editor of Gazette des beaux-arts, and Jules Laforgue, a poet and critic. In this happy scene, Renoir immortalizes all of his friends in a moment of pleasant socialization.

They sit on a veranda around a table surrounded by lush foliage—Renoir’s treatment of the nature around them feels perhaps the most Impressionist with the light shifting between the hues of green and yellow.

The veranda on which they sit is a real place that still exists; it’s called Maison Fournaise of Chatou, which is a floating restaurant on the Seine River. Boaters could float up to the restaurant, and it was a popular place to visit for Parisians during warm weather. He actually worked on the canvas both en plein air and in his studio. He had to work in his studio because he needed to focus on all of the fourteen sitters, who couldn’t all be together at once to pose for Renoir.

In 1954, the Phillips Collection caused some controversy when they hired restorers to work on the painting—unfortunately, several people thought the color was very negatively impacted, with colors reduced to drabby hues. You can look up the differences of the painting before and after the restoration to see the effects of the restoration for yourself.

Renoir, Luncheon of the Boating Party

Why We Are Talking About Luncheon of the Boating Party

Luncheon of the Boating Party is widely perceived to be a masterpiece. Other than being a visually beautiful, it has a fascinating story making it all the more interesting.

The canvas is one of the largest Renoir ever painted—in addition to its size, the composition is quite complex. In fact, Renoir commented on this painting, “every once in a while you must attempt things that seem too difficult.” (source) The work is a unique mix of figure painting, still life, and landscape—it is a carefully planned composition that merges them elegantly together. Despite the easygoing atmosphere, it was a long process to paint—he worked on this for sixteen months.

Apparently, he was stuck at one point during the process, but an interesting event helped him break through. Four months into the painting, Renoir fell off his bike, injuring his right arm, and forced him to use his non-dominant left hand, which actually ended up inspiring him to move forward. He once wrote, “It’s even better than what I did with the right. I think that was a good thing that I broke my arm. It allows me to make progress.” (source). Until this point, he was lost in the process which was “annoying” him. Some view this painting as an incredible example of artwork made largely with a non-dominent hand.

This is widely considered to be his last genuinely Impressionistic painting— it captures Renoir mid-career, between two styles. He worked on it at time when he was financially struggling, and his association with Impressionism (which was an edgy, almost outsider movement at first rejected). He was worried that it would prevent him from getting commissions. So, he shifted more into his mature figure-painting style, in which he depicted weightier bodies rather than the lighter treatment of Impressionist figures.

To illustrate this shifting style, note the glasses on the table and the boats in the background, which are painted with extremely loose brushwork in a classic Impresisonist manner. However, the figures themselves are more defined, especially the ones in the foreground. If you look at his earlier work, figures are painted much looser than in Luncheon of the Boating Party.

What do you think of the Luncheon of the Boating Party story? While paintings can stand on their own, knowing more of the background can add more meaning for the viewer.

Both conceptually and in terms of the artist’s life, it is a one-of-a-kind masterpiece that exemplified the lesireuly life of some Parisians in the summer. It lets the viewer sit in with this group of friends, and Renoir’s dreamy colors make it all the more pleasant to let your eye roam around.