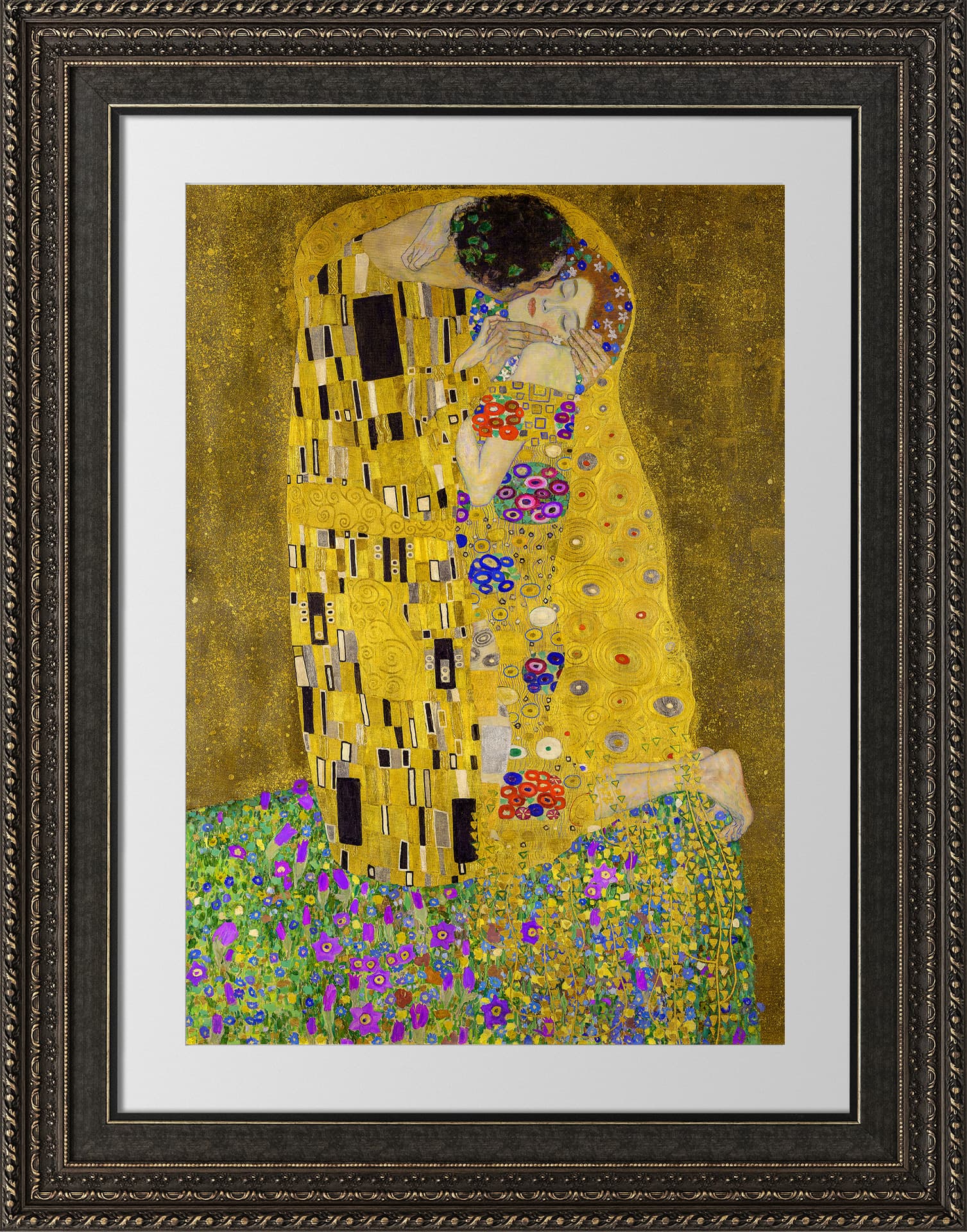 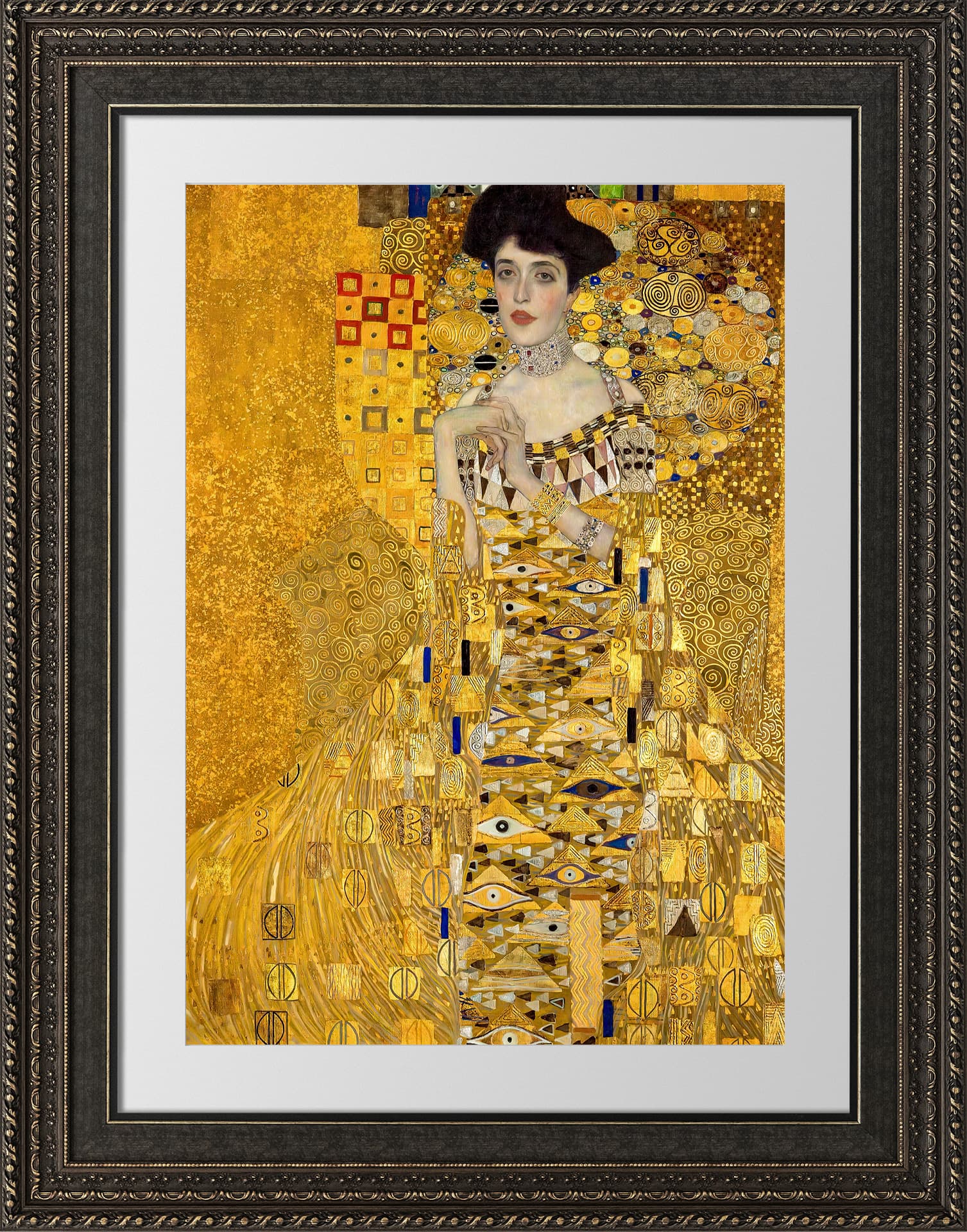 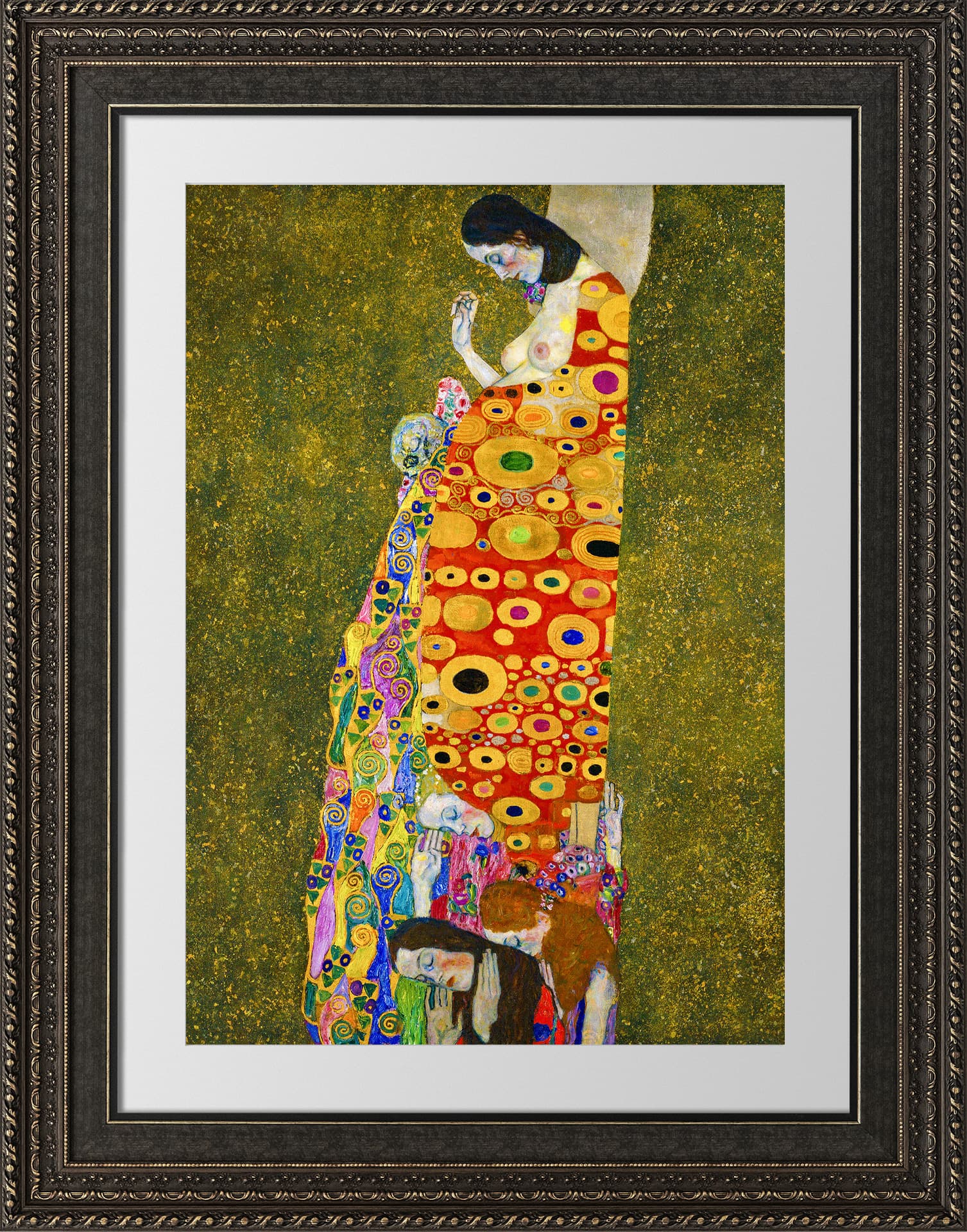 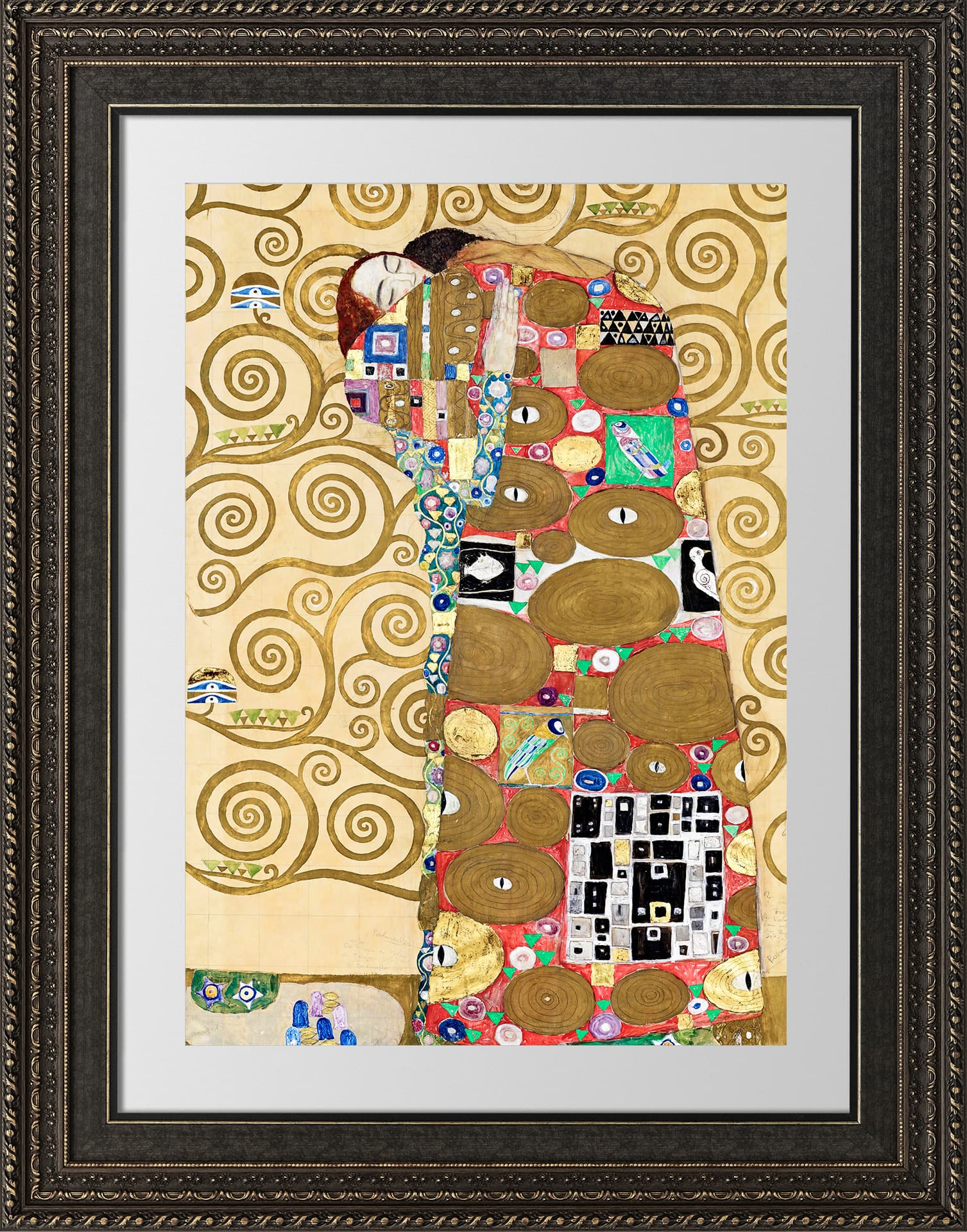 The Luminous Works of Gustav Klimt

With his glittering gold canvases and timeless themes, Gustav Klimt remains an iconic name in art history. Let’s explore what makes his work remarkable as well as learning a bit more about his life and style.

Born in 1862, Gustav Klimt grew up near Vienna, Austria. His father was a gold engraver, and his mother had hoped to be a musical performer, which never came to fruition.

Klimt’s drawing skills shined in school, so he applied to the Viennese School of Arts and Crafts (Kunstgewerbeschule) and easily got in. His art education was traditional, and he continued to excel in painting and drawing. Soon after graduating in 1882, he rented a large studio in Vienna, and quickly became in demand in the city’s cultural elite.

By the end of 1892, his younger brother Ernst—whom he worked closely with—and his father died, leaving Gustav financially responsible for his family in a time of grief, and his work production slowed.

Before moving into his later career, we want to highlight one specific event. In the late 1890s, Klimt was commissioned to paint the newly-built ceiling of his former university’s Great Hall. He chose to use Symbolist language that was hard to read, a negatively received shift. He was also admonished for his use of nudity—he vowed never to accept a public commission again.

The mature career of Gustav Klimt

Klimt is closely associated with the Vienna Secession, which resulted from a schism amongst the leading group of artists in the city. Due to being overlooked in favor of more conservative artists, Modernist artists broke ties, thus forming the Vienna Secession in 1897, which Klimt served as president for.

A main pillar of this movement was to provide young and unconventional artists an opportunity to exhibit. The group quickly gained a positive reputation in Vienna, and Klimt remained closely aligned with the movement until 1903.

Klimt’s productive period was from 1898 to 1908—actually, all of the works below fall into this time frame, his “Golden Period.”

Interestingly, Klimt never did a self-portrait, saying, “There is nothing that special to see when looking at me.” He was known as a reserved man throughout his life and rarely talked about his work.

Some of the most iconic works of Gustav Klimt 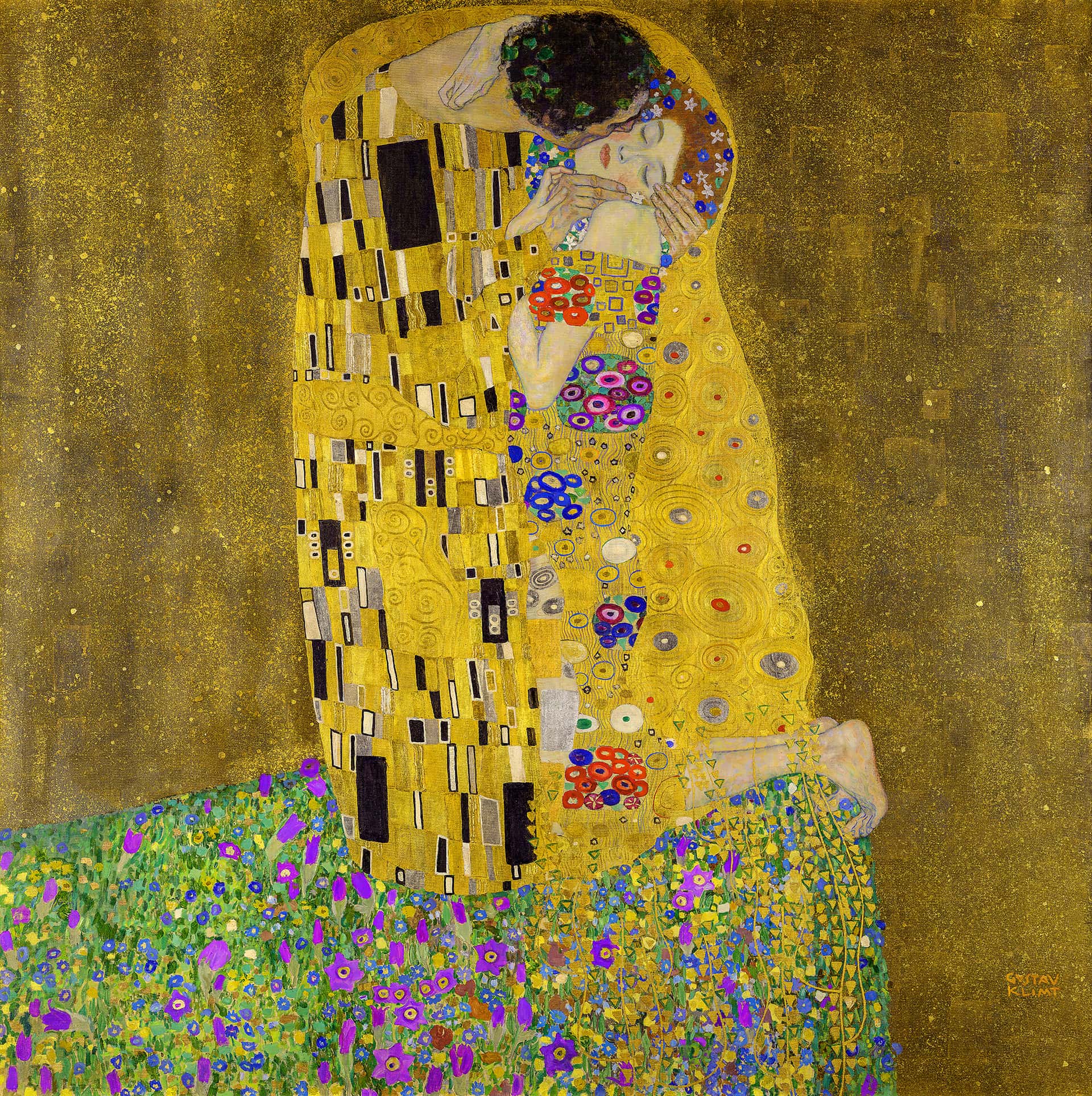 The Kiss is large at 180×180 centimeters—the size combined with the generous application of gold leaf makes it have a powerful presence on the wall and even online.

Klimt was interested in Byzantine mosaics, and if you can see this influence in The Kiss, especially with the use of gold and flatness. There was also a personal connection to gold—his father and brother were both metalworkers.

So, what’s the painting of? Two figures, fully robed, dominate the composition. A man kisses a woman, cradling her head, in a moment of both intensity and sensitivity. They kneel at the edge of a patch of flowers. Art historians suggest it’s Apollo kissing Daphne in mythology—however, it can be thought of outside of mythology. It’s simply a human moment, one of both passion and tranquility.

Fun fact: the painting was sold before he finished it. This was a rebound from Klimt’s scandal caused by previous “pornographic” work. Now, The Kiss is one of the most reproduced paintings ever. 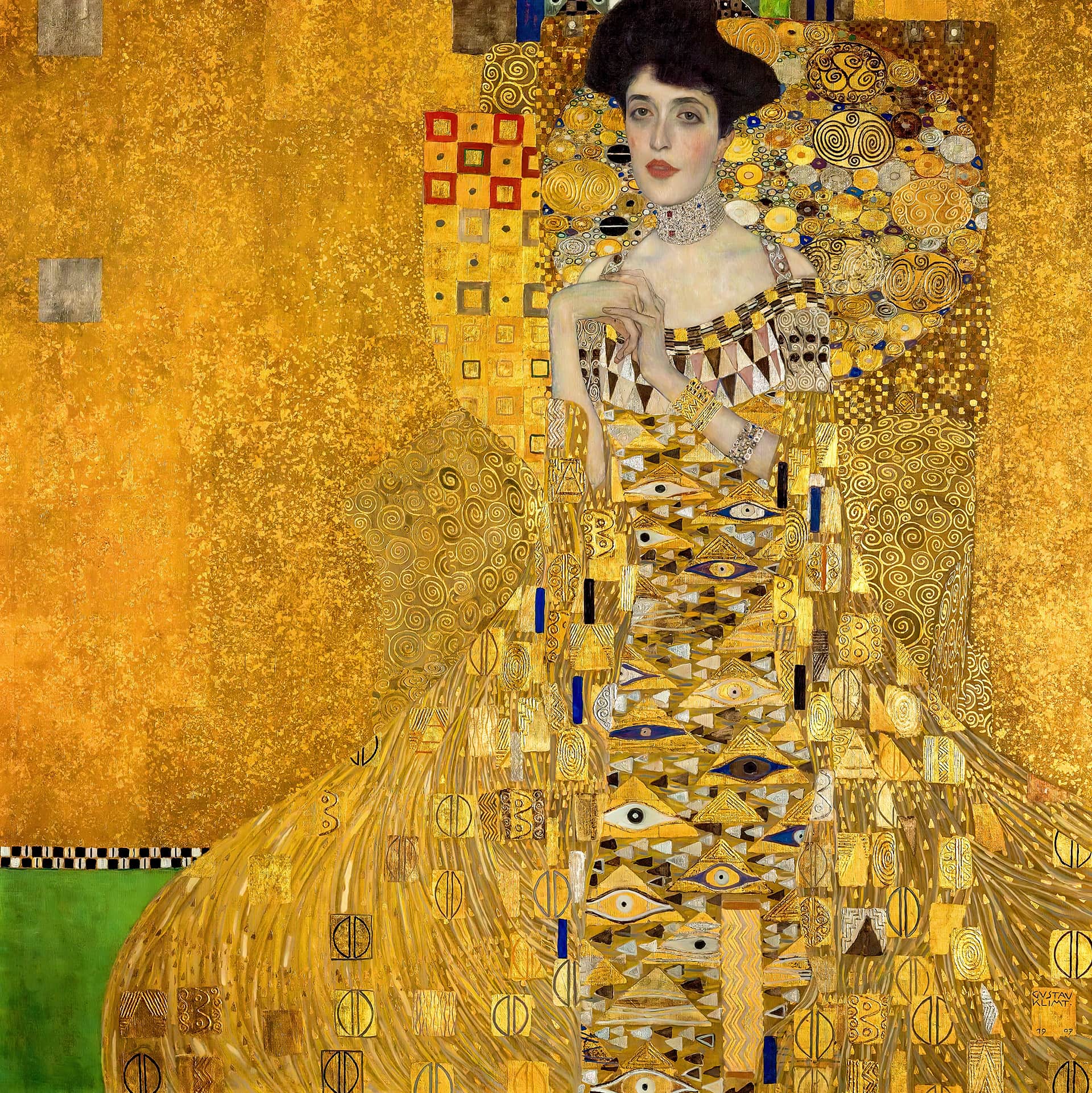 Also called The Lady in Gold, this luminous work has many similarities to The Kiss.

Commissioned by a Jewish banker, the work depicts his wife, Adele. Klimt chose again to use gold and silver leaf alongside his Symbolist language. Apparently, he did more preparation—over 100 sketches—for this than he did for any other artwork.

Adele is transported into a sort of heavenly realm here. Historians have different readings on the work—some feel that she embodies divine femininity, while others feel she looks melancholy and aloof. In the opinion of some, there is little focus on Adele’s character (technically, less than 1/12 of the portrait is actually of her face, hands, and hair).

Klimt loved painting women, saying, “I am less interested in myself as a subject for painting than I am in other people, above all women.” 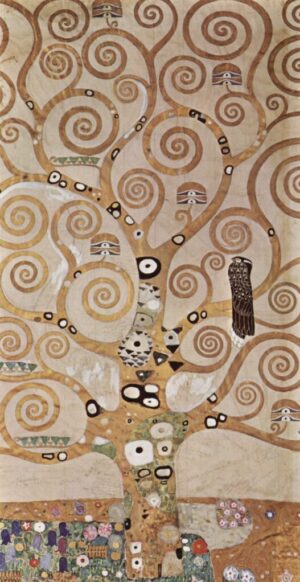 The Tree of Life references the symbol present in theologies and is his only landscape painting made during his Golden Period.

How Klimt paints it is unique. The branches are twisting and twirling, illustrating life’s complexity. Like much of his work, there are divided interpretations. Some feel he paints it with the concept of unity at its core, while others feel it emphasizes masculine and feminine energies, especially since he includes figures. He uses a lot of imagery—particularly many geometric shapes—for the viewer to ponder in their own time.

Klimt includes a blackbird near the center, so the eye has a stark anchor while the branches reach up and out. Since blackbirds are symbols of death in many cultures, Klimt reminds us that everything has a beginning and also has an end. 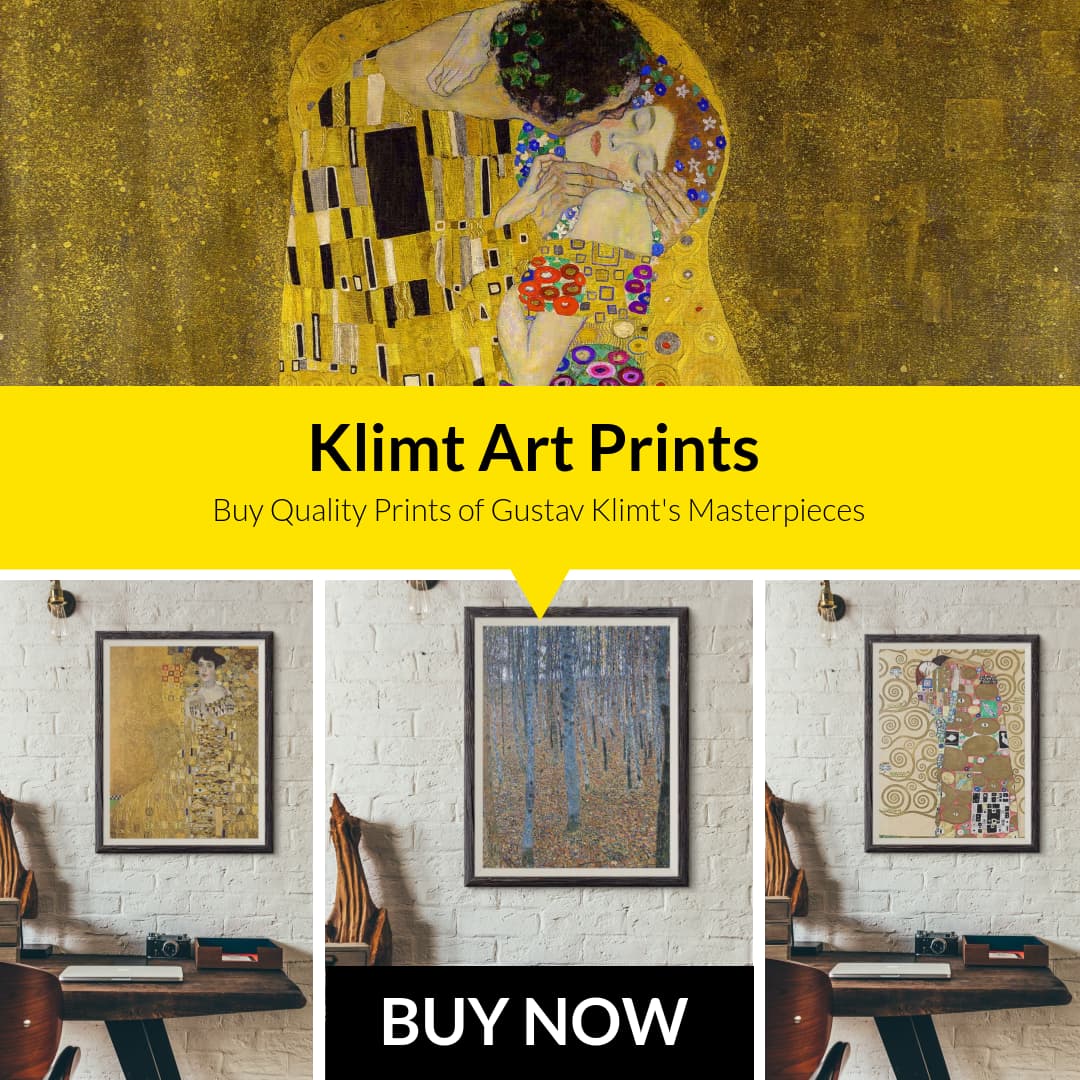 All about the style of Gustav Klimt

Themes in His Work

His art is also brimming with mythological allegories, symbols, and philosophical ideas—although he leaves the exact meaning up to the viewer. Additionally, Klimt explored the human psyche in his paintings, although his work isn’t overtly personal.

Two major aspects of Klimt’s paintings are glittering appearances from gold and silver leaf and their often lack of perspective. This is, in part, the Byzantine mosaic influence, which he saw on a trip to Italy. In fact, Gustav Klimt’s paintings have a mosaic feel to them with their smattering of geometrical shapes. He also derived influence from Egyptian, Minoan, and Classical Greek sources.

For example, in The Kiss, the foreground and background are flattened into planes, and the figures’ robes are reduced into shapes. The only perspective in the work is the action of the man cradling the woman’s sideways-facing head.

To wrap up this Klimt spotlight, we want to leave you with a powerful quote by Klimt: “Whoever wants to know something about me ought to look carefully at my pictures and try to see in them what I am and what I want to do.” He spoke through paintings, not words. 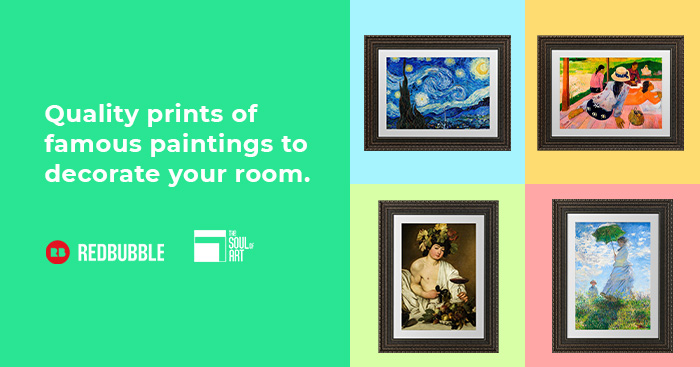 14 Famous Landscape Paintings You Should Know About