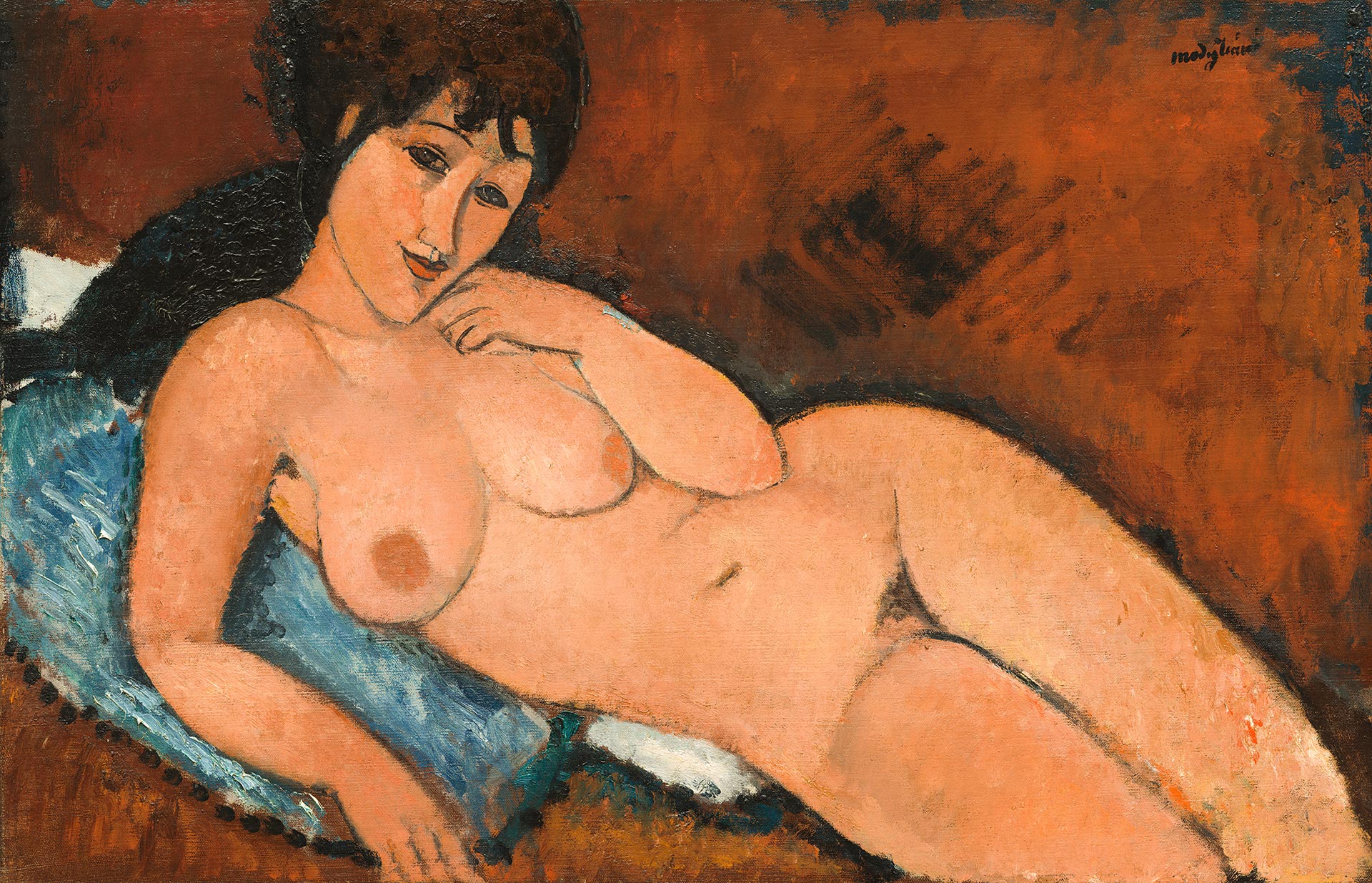 Nude on a blue cushion

Nude on a Blue Cushion (1917) is a painting by Italian artist Amedeo Modigliani. Sizing at roughly 25×40 inches, the composition depicts—as the name suggests—a reclining female nude resting on a blue cushion. This nude is one among many that Modigliani painted in 1916 and 1917, a time in which he devoted himself to the well-canonized subject.

The work is held at the National Gallery of Art in Washington, D.C., in the West Wing which is devoted to modern art. In fact, if you roam among the halls, you’ll come across many, many female nudes, highlighting their popularity with many artists of the 20th century.

We’ll get to this more later—but this painting was not well-received In Paris, where it was made, as it was too revealing for popular sensibilities. It wouldn’t earn acceptance until long after Modigliani’s premature death at 37.

When looking at art—even if it doesn’t add value or skill to the work—it’s interesting to dive into the background of the artist who made it. So, who was Amedeo Modgliani?

Born in 1884, he grew up in a Jewish family in the port city of Livorno, Italy. The town was a refuge of sorts from those suffering persecution due to their religion, making it home to a sizable Jewish community.

One fascinating story from his childhood was that his birth saved the family in a way. Modigliani’s father was on the verge of financial collapse when his fourth child was about to be born. Creditors were not allowed to seize the bed of a pregnant woman or a woman with a newborn child—they walked in as she went into labor, and the family piled valuable assets onto the bed to protect them from also getting taken.

Despite the dire circumstances surrounding his birth, Modigliani would grow up in relative comfort. Later, his work became defined by a rejection of his bourgeois childhood following his formal art education. Inspired by Existentialism and the writing of Nietzsche, Baudelaire, and Carducci, he lived a vagabond lifestyle upon his move to Paris in 1906.

He chose to forego painting landscapes and instead painted portraits to explore the psychology of himself and his subjects, who were generally other artists or lovers. His style is very expressive, often similar in treatment to portraits of Paul Cezanne, whom he greatly admired; Modigliani was also friends with his contemporary Pablo Picasso after they met in Paris in 1906. Like Picasso, he drew a lot of inspiration from the imagery of so-called “primitive” cultures, most often African or Pre-Columbian statues. Elongated faces, necks, and bodies define his work.

A rather important fact about Modigliani—which at times defined his art practice—was his intense use of alcohol and drugs, which got worse throughout his life. At the time of the creation of Nude on a Blue Cushion, he was deeply struggling with his addictions. Furthermore, he was wracked with Tuberculosis since childhood, and his symptoms worsened towards the end of his life. He reportedly didn’t mind if people thought him an alcoholic as its ragged toll on his body covered up his battle with Tuberculosis, which was a contagious and therefore unaccepted condition. He died in 1920 poor and without achieving significant artistic recognition. 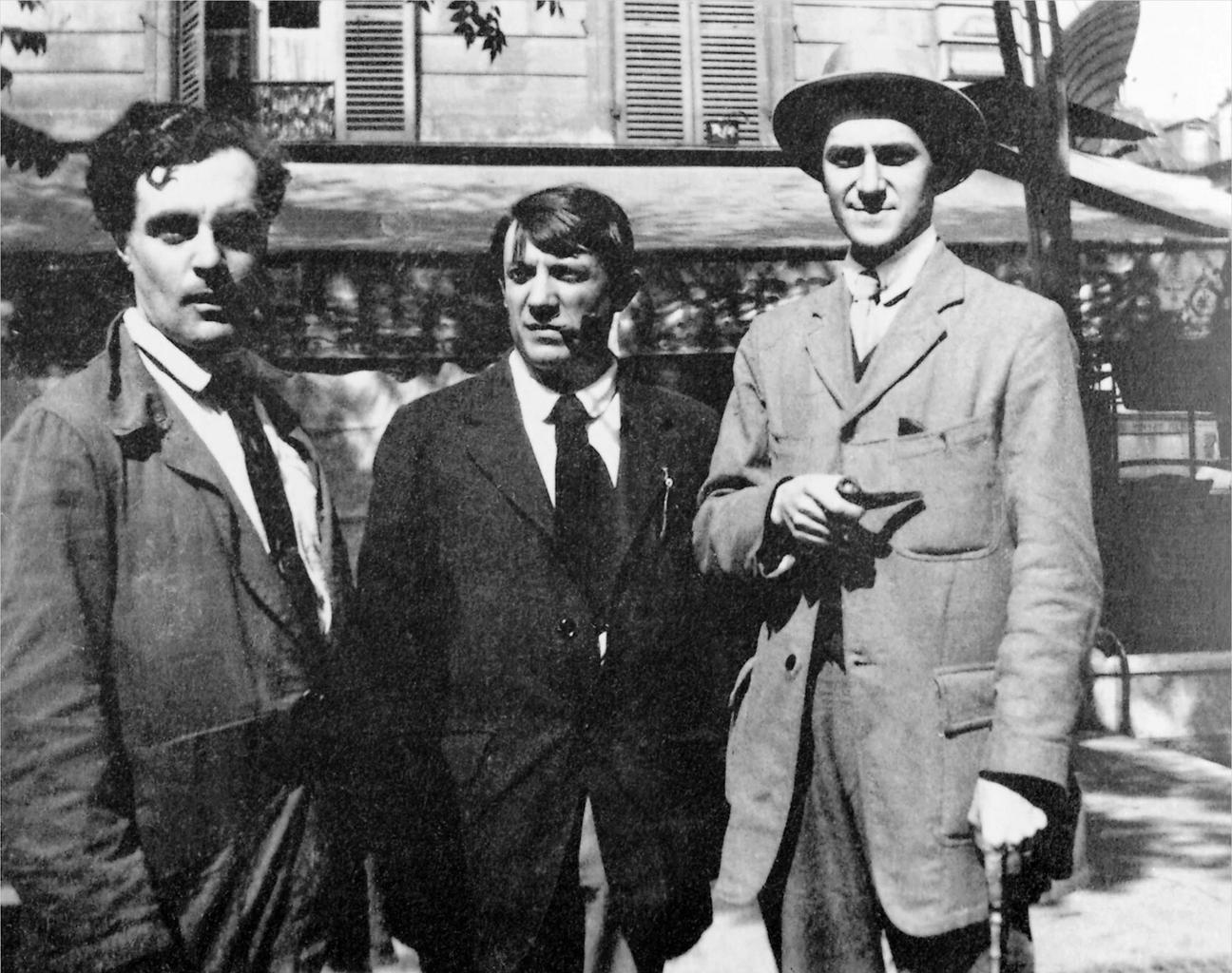 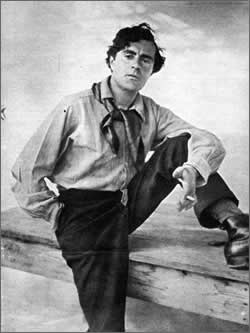 More on The Story Behind Nude on a Blue Cushion (1917)

So, why do we keep mentioning the seductive nature of this piece? Why does it matter? Who is the woman? Nowadays, we are much more used to seeing a wide variety of subjects, and art that was once offensive is commonly accepted nowadays.

There is not an overwhelming concrete background to this work. We know that in 1916, while living in Paris, Modigliani was commissioned by his dealer Zborowski to paint a series of nudes. He subsequently moved into the dealer’s apartment where he painted supplied models already paid for—Nude on a Blue Cushion was probably a part of this commissioned series. Apparently, the artist gave his models quite a bit of freedom when choosing their poses. Around the same time, he met his wife-to-be, Jeanne Hébuterne, who he would paint frequently but never in the nude.

The series of nudes differed from the rest of his practice in multiple ways: he was painting someone he didn’t know (normally he painted acquaintances) and they were commissioned work, therefore perhaps meant to appeal to Zborowski or commercial purposes.

Lastly, as we’ve mentioned: for the time, this portrait was seriously daring. It was more sexualized than most other female nudes of the time, and it was just one among many: he made several of them during his creative mission of devotion to nudes in 1916 and 1917. At this time, his lifestyle even stood out in the Bohemian atmosphere of Paris—he was struggling with drinking and drugs and having affairs, in part fueled by his financial support of his dealer.

Why Are We Talking About This Work?

Additionally, he was a fascinating figure whose legacy is rather complicated. Art historians can’t squarely fit him into one movement, but his work is often associated with Expressionism, Cubism, Proto-Cubism, and more. His legacy is further muddled by his disheveled estate of works, and his early death and rising art market value has encouraged many fakes of his work to be maden which has caused drama in recent years.

Since his death, Modigliani’s reputation has received much more attention. Several books, a documentary, three feature films, and a play have been made about his life. To put it into context, he was known to exchange works of art for meals at restaurants, but nearly a century later, in 2012, collector Steven A. Cohen purchased Reclining Nude with Blue Cushion (another nude from the same period) for $118 million.

Write your thoughts in the comments… 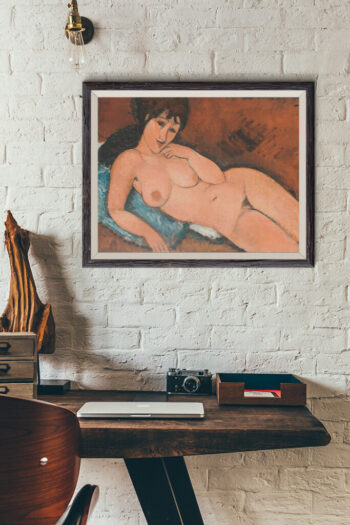 Do you like this work of art? Buy Nude on a Blue Cushion Print

Buy Nude on a Blue Cushion as a large print, canvas or gadget directly from the Redbubble website